Daeva from the Soil (

This time it's the turn of Exoskull Raiden!

Ooh, Kurosu Kyouma! My gashapon finally has an identity XD !

This guy first popped in the short Kakugo no Susume VOLTEX, then got his very own action figure, then he became a "regular" in Exoskull.
After a short appearance in the first volumes, finally his face is revealed!! 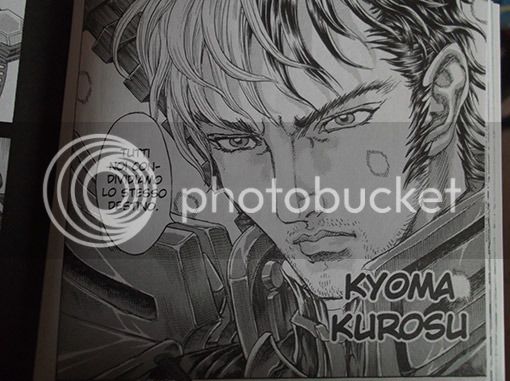 That was quite cool then I realized that--

WTF, IS HE BLACK JACK (aka Hazama Kuroo) x'D ?!
Same hair-- Same look-- He's a doctor, too!
The only difference is that Kyouma doesn't have a scar on his face XD

For the sake of completion, I found some stuff about that Kaika no Susume (開花のススメ), the sidestory of Exoskull Zero focused on Raiden, here personified by Kaika Kurosu, the little sister of Kyouma looking for her bro who got missing:

From what I got, the Raiden spotted by Yakumo in the first volumes of Exoskull back in the days was Kaika, not Kyouma.

Looking for stuff I found some previews of the manga where we can spot a bit of Kyouma: